Julie Kidd is CEO of Funny Mom Productions.  She was crowned Hilarious Housewife on ABC's The View and has made additional appearances.  Julie is the producer and emcee of the "FUNNIEST HOUSEWIVES" comedy show - a sellout everywhere they perform, featuring some of the funniest female comics in the industry and on all tv platforms. Julie also produced the "FUNNIEST HUSBANDS" and "SINGLE MOM THE MUSICAL".  TV credits include: Nickelodeon, The View, I Can See Your Voice, Extreme Gong, Wipe Out, NBC Life Moments, Iyanla Vanzant, Character Fantasy. Oh, and we can't NOT mention that Julie is an award winning Tap Dance Choreographer and taught dance for over 25 years. In addition, her workout video "Tap-N-Burn" was rated #1 workout in Shape Magazine and raved about on The View and numerous news stations across the country. 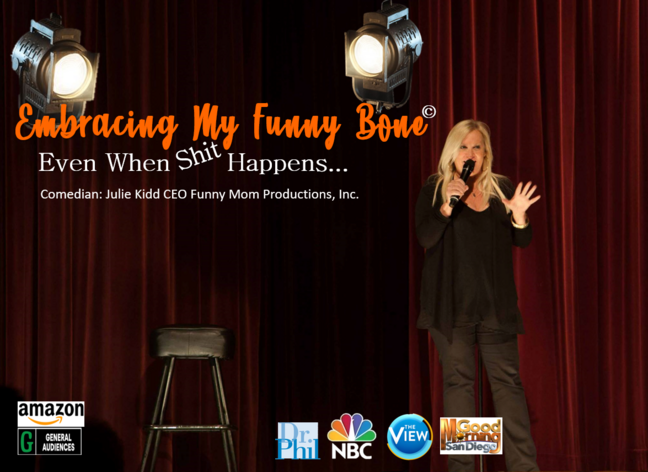 Julie is the creator of Tap-N-Burn, a tap dance exercise program that was featured on Dr. Phil, The View, and numerous news stations across the country.  It's was also featured with reviews in Better Homes and Garden, OC Metro and Shape Magazine as top work out program.

Julie Kidd has a fascination with palm reading and has been studying the art for two decades.  She started reading the palms of funny comedians and has opened her reading to the public. You can see her on Fox TV "I Can See Your Voice" with Ken Jeong host on Hulu (original air date 1/26/22).